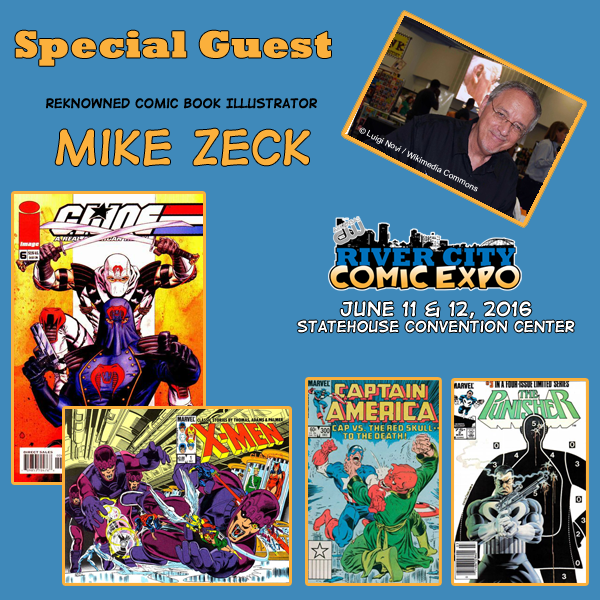 A heavy-hitter in the comics industry, and influencing generations of artists, one would have to argue which of Mike’s series has been the most influential, or which is embossed most deeply in our pop culture:

Zeck’s epic six part story “Kraven’s Last Hunt,” with J.M. Dematteis and Bob McLeod, springs immediately to mind. This groundbreaking series took the Spider-man character to a whole new level, and has been touted by readers as the “Greatest Spider-man story of all time,” in recent polls.

Considered one of “the” Punisher artists, Zeck’s work with writer Steven Grant on the character–collected as “Circle of Blood”–sets the standard for the look and feel of the Punisher and propelled him to flagship character status at Marvel. In fact, along with air-brush artist Phil Zimmelman, Mike has created some of the most recognizable painted images of the Punisher ever made;

The Limited Series “Secret Wars,” set the comic book readership on their ears, and brought a new black-and-white costume design for Spider-man (designed by Zeck) which is still recognizable and indelible to this day. Spider-man wore the costume temporarily, and it still lives on in the form of the super-villain, Venom.

In short, when you stop and think of the t-shirts sporting Zeck images, the homages to his covers, the lineage of his storytelling, you need a long sheet of paper to start writing them down.

Michael J. Zeck it seems, always knew he would work in the arts. Born in Pennsylvania and growing up in South Florida, he later attended the Ringling School of Art in Sarasota, Florida, his eye always on working in the sequential art field. He began that career at Charlton Comics with their animation-related line of comics leading to horror titles, later moving on to Marvel Comics. Some of his first work at Marvel included “Master of Kung Fu” and “Captain America,” with many more titles, at numerous companies, to follow from there.

Zeck’s work has graced the pages and covers of “Aquaman,” “Batman: Legends of the Dark Knight,” “Green Lantern,” “G.I. Joe,” “G.I. Joe: Special Missions,” “Lobo,” “Deathstroke The Terminator,” “The Eliminator” and too many titles to mention here.

As part of the VIP package at the NYC Experience to commemorate this rare appearance, Zeck will be promoting his creator-owned project “Damned” (with writer Steven Grant), with a limited edition poster. A new collected edition of the series “Damned” will be published by BOOM! Studios this fall.