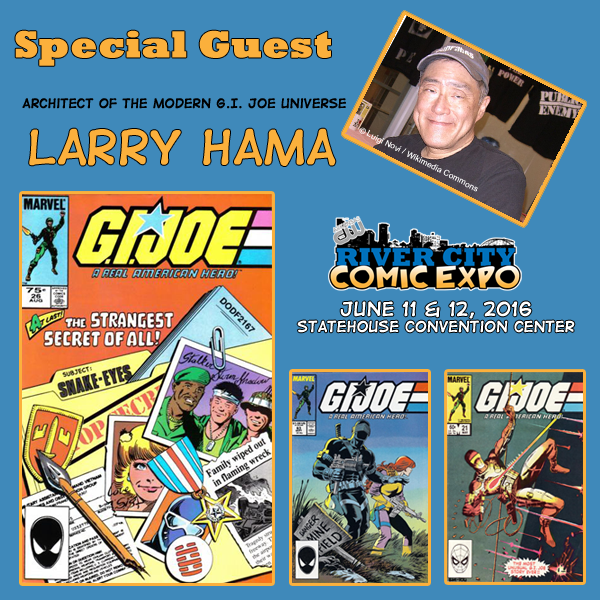 Larry Hama is a third-generation American, born in Manhattan, New York City, New York, and raised in Queens. He “played Kodokan Judo as a kid” and later studied Kyûdô (Japanese archery) and Iaido (Japanese martial art swordsmanship). Hama sold his first comics work to the fantasy film magazine Castle of Frankenstein when he was 16 years old. After high school, Hama took a job drawing shoes for catalogs, and then served in the United States Army Corps of Engineers from 1969 to 1971, during the Vietnam War, an experience that would inform his editing of the 1986-1993 Marvel Comics series The ’Nam.
Larry Hama is best known as writer of the Marvel Comics licensed series G.I. Joe, based on the Hasbro line of military action figures. Hama said in a 2006 interview that he was given the job by then editor-in-chief Jim Shooter after every other writer at Marvel
had turned it down. Hama at the time had recently pitched a Nick Fury: Agent of S.H.I.E.L.D. spin-off series, Fury Force, about a daring special mission force. Hama used this concept as the back-story for G.I. Joe. He included military terms and strategies, Eastern philosophy, martial arts and historical references from his own background. The comic ran 155 issues (Feb. 1982-Oct. 1994).
Hama also wrote the majority of the G.I. Joe action figures’ file cards—short biographical sketches designed to be clipped from the G.I. Joe and COBRA cardboard packaging.[3] In 2006 these filecards were reprinted in the retro packaging for the G.I. Joe: A Real American Hero 25th Anniversary line.
Hasbro sculptors sometimes used real people’s likenesses when designing its action figures. In 1987, Hasbro released the Tunnel Rat action figure. The character is an Explosive Ordnance Disposal specialist, whose likeness was based on Hama.
From 1986-1993, Hama edited the acclaimed comic book The ’Nam, a gritty Marvel series about the Vietnam War. Additionally, he wrote the 16-issue Marvel series Nth Man: The Ultimate Ninja (August 1989-September 1990), concerning the adventures of John Doe, an American ninja and Special Forces commando in an alternate reality in which World War III is sparked after the world’s nuclear weapons stockpiles are all destroyed. Hama also edited a relaunch of Marvel’s black-and-white comics magazine Savage Tales, overseeing its change from sword-and-sorcery to men’s adventure.
While working at Neal Adams’ Continuity Associates, Hama developed a series he first created in 1978, Bucky O’Hare, the story of a green anthropomorphic rabbit and his mutant mammal sidekicks in an intergalactic war against space amphibians, which went on to become a comic, cartoon, video game and toy line.